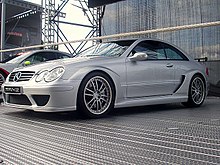 Affalterbach, Apr 30, 2004 – The most successful car in the German Touring Car Masters (DTM) race series is set to transform its dominance on the track into a conquest of the roads. The CLK DTM AMG has inherited the genes of the DTM-winning Mercedes and possesses all the ingredients necessary to set the pulses of car and motorsport enthusiasts racing that extra bit faster. This exclusive AMG high-performance speedster is modelled both stylistically and technically on the car that romped away with the DTM title in 2003.

Bernd Schneider drove the race-trim Mercedes-Benz CLK to the drivers’ championship, but was pushed all the way by team-mate Christijan Albers. AMG-Mercedes had previously topped the team standings in 2002 and 2003, also with the CLK. Last year, the impressive Coupr celebrated victory in nine out of the ten races on the calendar, ensuring that Mercedes-Benz also won the constructors’ championship.

You need look no further than the exterior design of the new CLK DTM AMG to find the first traces of its racing pedigree, the transfer of high-end motorsport technology to the road given visual expression by the low slung front apron with large cooling air inlets, striking fender flarings, 19 and 20-inch AMG light-alloy wheels and the diffusor-look rear section with rear wing, all of which recall the head-turning muscularity of the successful CLK racing touring cars competing in the DTM. Added to which, a host of body components have been constructed from the high-strength and ex-tremely lightweight carbon-fibre-reinforced material CFRP.

Under the bonnet lurks a specially revised version of the AMG supercharged eight-cylinder engine familiar from the SL 55 AMG, featuring modifications to the crank-case, pistons, valve train, cooling system, intake duct, supercharger and exhaust system. Its torque development is particularly outstanding, with 690 Newton metres of pulling power on tap as low down as 2000 revolutions per minute and the 750-Nm mark reached and breached just 500 rpm further around the dial.

The following components of the engine borrowed from the SL 55 AMG were newly designed and developed:

-The crankcase from the SL 55 AMG power unit has been further strengthened. -The pistons are forged and made of a special material boasting extreme temperature and pressure-resistant properties. -The exhaust camshafts have extended valve opening times, which improves the fuel supply to the combustion chambers; in conjunction with the new fan-type exhaust pipes and the new sports exhaust system, exhaust gas backpressure is significantly reduced. -Optimised intake airflow leads to better air throughput in the cylinder heads. -The higher-revving screw-type supercharger raises charge pressure from 0.8 bar to 0.85 bar. -The engine electronics have been adapted to the unit’s upgraded performance characteristics.

The cooling system of the supercharged eight-cylinder power unit has also been optimised. The water-cooled intercooler with low-temperature circuit is fitted with additional radiators integrated into the front apron, which help to even out tempera-ture peaks. An efficient engine oil cooler on the left of the system keeps the temperature of the lubricant at low levels even under heavy loads.

The chassis, meanwhile, is a more than worthy complement to the beguiling muscle of the powertrain. Already a firm fixture on the race-track, height-adjustable spring and shock absorber units with adjustable coil springs are also an integral feature of the new road car. The rear axle has been redesigned to include totally new spring links and hub carriers, as well as reinforced drive shafts. Uniball joints on both axles replace rubber elements and imbue the car’s driving characteristics with unrivalled precision. A multiple-disc limited-slip differential at the rear axle ensures optimum traction, whilst Acceleration Skid Control ASR and the Electronic Stability Program ESP have been adjusted to take into account the enhanced levels of performance.

Flawless responses, impressive sensitivity and unrivalled strength are the principal attributes of the newly developed AMG braking system. This technology, based on axial and radial connections between the grey cast iron discs and aluminium bowls, has the advantage of cutting weight by some 20 percent and increasing heat resistance. All discs are internally ventilated and perforated. The front axle is equipped with 360 x 32-millimetre discs and six-piston fixed callipers, the rear axle fitted with 330 x 26-millimetre discs and four-piston fixed callipers. The standard Brake Assist system has been adjusted according to the characteristics of the new braking system.

Once inside the CLK DTM AMG, the driver is struck by a functional racing ambience laced with the trademark exclusivity of AMG high-performance cars. Two leather AMG sports bucket seats made from exceptionally lightweight CFRP and fitted with four-point safety belts offer the two occupants optimum lateral support, whilst the thick and oval-shaped rim of the high-grip suede-trimmed AMG racing steering wheel helps to transmit a particularly acute feel for the car. The door panels are made from CFRP, as are many other elements of the interior such as the instrument cluster. The newly designed centre console boasts a selection of eye-catching features, including the silver-coloured selector lever surround, the starter button, four rocker switches for auxiliary functions and a badge bearing the vehicle number.

The racing credentials of the CLK DTM AMG have not in any way diluted its adher-ence to the hallmark virtues shared by all Mercedes models = practicality, durability, safety, quality and service all meet the highest standards. The racing-inspired AMG Coupe will be built by hand as part of a close cooperation between Mercedes-AMG GmbH and H.W.A. GmbH. One of the most successful touring car racing teams of all time, H.W.A. GmbH is also responsible for the development and running of the new C-Class DTM cars. The first examples of the 100-unit limited-edition CLK DTM AMG will be delivered to customers from autumn 2004. Mercedes-AMG GmbH is responsible for marketing, sales and service activities relating to the new car.

Story by DaimerlChrysler, edited by Supercars.net