Can you Really earn 10% Annual Returns These Days!?!

Find out at the MMM Lending Club Experiment Headquarters.

In September of 2012, I started making a series of investments in the relatively new field of peer-to-peer lending, choosing a company called Lending Club as the destination.  The goal is to see if the higher returns really are attainable without luck or amazing analytical powers.  It all started with these two articles:

This page will document my ongoing results, with results updated periodically (especially after significant economic events).  Since you’re probably a “Show me the Money” type of person, let’s jump right to the results, then do a little analysis afterwards:

Remember, the whole idea of Lending Club is making higher-risk loans in exchange for interest rates that are far higher than what you get in a guaranteed spot like a savings account. But along with high returns come some financially unstable borrowers, so it is inevitable that a certain percentage of loans will go bad. That’s all factored in to your expected rate of return.. but the million-dollar question is: Will the default rate end up being much higher than what Lending Club predicts?

I have seen many arguments on both side of this issue. In the early days, the more sophisticated ones (in my view) still seem to come down on the side of “projected returns are likely to be accurate”.

However, the company expanded aggressively to earn new borrowers over the years, and some of the marketing was targeted towards buying more shit rather than getting out of debt by refinancing old loans and halting your bad habit of buying shit. Also, I believe the flood of cheap investor capital led to lower interest rates and more lax standards.

In my opinion, this is a recipe for bad lending. Nobody should be borrowing money for consumption – buying a truck, boat, or a kitchen renovation.

The only things worth borrowing for are appreciating assets – a house in a reasonable market, and business and education in certain cases. Since Lending Club’s interest rates are not low enough to be used for mortgage or business lending, I had my account set to only fund debt consolidation loans.

But the good thing about this experiment, is that we get to find out for ourselves.

Here is my allocation across various note grades: 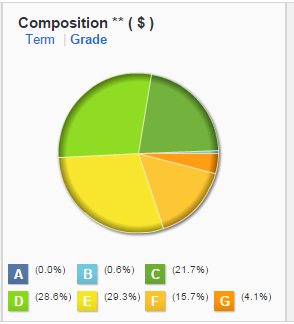 Most of my notes are the volatile but high return D and E grades – this is the key to the above average returns of this experiment.

Now about 4 years into the experiment, we’ve been seeing the expected stream of defaults and chargeoffs for quite a while.  I’ve been looking into defaults individually to search for patterns. As a group, new loans seem to experience a wave of defaults, while people who have established a pattern of payment seem to continue paying. After about two years, the return seemed to have stabilized, but more recently they have started dropping again.

After accounting for all defaults so far,  the annualized return of 10.18% is about 2% below the forecast.

The next test will be to see how this account survives a stock market crash and a recession (compared to the stock market as tracked in my Betterment experiment), whenever that happens next.

There is a very handy new Rate Adjuster feature on the LC dashboard: click it and it will automatically calculate a more conservative rate of return for you by writing off a portion of your late loans for you based on the percentage of those loans that on average are recovered, versus going bad. Clicking it with today’s results, I get 8.27% – a number which was stable above 10% for some time but has really started dropping in late 2016, so it might be the real answer for our long-term returns.

More conservatively, if you just look at more recent returns, my passively ignored account has grown from about $35,000 to $42,000 over the last two years – a compound annual growth rate of 9%.

After analyzing the early results, I noticed that my manual note selection was not particularly magical at increasing returns or decreasing defaults. So on January 30th, 2014, I switched the account over to their Automated Investing (formerly called ‘Prime’) service, which will handle reinvestments automatically for me. AI will obey your desired allocation across note grades, and you can now even combine it with one of your manual filters. This experiment has been going well, and the reduced amount of idle cash is providing higher returns and lower stress – no more manual fussing around with notes.

Since beginning this experiment, Lending Club itself has grown significantly in scale. This article in the Economist describes the flood of institutional money that is now pouring in to these notes, and the May 2013 Google Investment in Lending Club was a boost to its stability and credibility as well.

May 2016 Update: The company hit the news recently due to some improper handling of loans sold to a large investor. CEO Renaud Laplanche resigned over the issue and their stock price took a plunge. Some details in this NYT article. This has triggered an investigation by the US Department of Justice and SEC.

August 2016 Update: This Bloomberg article revealed some more questionable history in the company: back in 2009, the former CEO and other insiders took out some unneeded loans and rapidly repaid them to juice the company’s early results to impress investors. There were other allegations regarding individuals taking out multiple loans to cheat the risk ratings system, but I feel that this response by the new CEO Scott Sanborn addressed that properly, unless further information comes in.

So while the news certainly isn’t ideal, it sounds like the company is likely to recover in the long run. I’ve halted the reinvestments, but I don’t see a reason to cash out too hastily by selling the notes on the secondary market. If you’re not confident about investing yourself, you can just watch what happens to my investment instead, with no risk.

It will be interesting to see if my loan results keep going downward, or if they flatten out and recover again. Especially if the US economy happens to tip into a recession before they’re all paid off. Fun experiments with real money, in the name of curiosity and science :-).