Fingerprinting for ID cards – what can be done? #NoFingerprintIDs

As of August 2, 2021, voluntary fingerprinting will become compulsory: Against criticism from data protection and fundamental rights organisations, EU governments and a narrow majority in the EU Parliament adopted a regulation to strengthen the security of ID cards and residence documents (PDF) in 2019. A German transposition law is already being drafted. Starting August 2, 2021, this law will force people to groundlessly submit a print of their left and right index finger upon application.This means that millions of law-abiding citizens are being treated like suspected criminals. We consider this to be undemocratic and advise:

Everyone who would like an ID card without fingerprints should apply for one before storage obligation begins. For information on how to support the efforts against this new law, please see below: Take action now. NoFingerprintIDs

A pointless attack on human dignity

Digitalcourage considers this regulation to be an attack on the dignity of all people affected. This law is in violation of fundamental rights. The mandatory but groundless provision of biometric data is incompatible with the values of constitutional states and democracies, and more befitting of control hungry police states.

Until now, fingerprinting for ID cards has been voluntary in Germany. It is, however, already mandatory for passports. Citizens can still choose whether their new ID should contain fingerprints or not. In practice, people are rarely informed about the voluntary nature and consequences of fingerprinting. Instead, they are encouraged to submit their fingerprints in the application process without proper clarification.

From August 2, 2021, fingerprinting will become compulsory: fingerprints will be stored locally on a chip on the ID cards themselves. The EU regulation 2019/1157, which contains the fingerprint obligation, was passed in 2019 with votes from Germany. With the law to strengthen security in passports, identity cards and documents issued to non-German citizens, the German ID card law will be adapted accordingly (for more information see bmi.bund.de, German only). Anyone who currently owns a valid ID card can use it until its expiration date – there is no obligation to carry an ID card with fingerprints from 2 August 2021. We therefore recommend applying for an ID card without fingerprints before August 2, 2021, in order to be able to use it for 10 years. For more info: take action now. The issue is on the Bundestag agenda for 10 September 2020, see bundestag.de. This may however be changed at short notice.

Note: If no fingerprints can be taken due to wear of the fingertips or injuries, identity cards without fingerprints will be issued for 12 months at a time:

Article 4: (3) “Member states shall issue an identity card for a period of validity of 12 months or less when, temporarily and for physical reasons, no fingerprints can be taken.”

Why fingerprinting is problematic

In our view, mandatory fingerprinting is a mistake, as it entails political, technical, fundamental and ethical threats, but does not solve any problems.

This box has been updated on 8 December 2020
Legal action against the EU fingerprinting requirement may be difficult due to the existing legal standing at the European level. Nevertheless Digitalcourage is checking on options in Germany. You can support this effort (German language only).

In some states (for instance in Germany) it is possible to request ID cards without fingerprints until August 2, 2021. We advise everyone who would like an ID card without fingerprints to apply for one before the storage obligation begins. But: New identity cards are only valid for a maximum of 10 years. It is therefore still necessary to take action and to permanently change policy on the EU and federal levels.
Even though the regulation – and a national implementation law in some states – has already been adopted, activists can inform citizens about their options. They can also explore legal options and raise awareness of the dangers of biometric mass fingerprinting. Spread the criticism in your state!

Here is what you can do:

We have a request: Please let us know what you did and what reactions you received. E-mail us at: mail+persoohnefinger@digitalcourage.de or at Fediverse or Twitter: #NoFingerprintIDs / @digitalcourage

Some background information: It’s not about security

Regulation (EU) 2019/1157 was justified on the grounds of security, “in particular related to terrorism and cross-border crime” (see recital 6). Mandatory fingerprinting is intended to make ID cards more secure against counterfeiting. However, according to the EU border agency Frontex, (see PDF on frontex.europa.eu p. 22) the number of forged documents is already declining rapidly, due to improved technical features. The effectiveness of the regulation for the prevention of terrorism has not been proven. Investigations into the NSU murders as well as the terrorist attack by Anis Amri have shown that the perpetrators were already known to the authorities. A lack of data, monitoring and identification techniques was not the problem for investigative authorities. Sascha Lobo goes into more detail in the German article Klare Zahlen gegen Massenüberwachung on netzpolitik.org. Fingerprinting of millions of law-abiding citizens is unnecessary and dispropotionate.

In our view, regulation (EU) 2019/1157 is security theatre to the detriment of the population:

A policy that attacks and sells off our freedom does not deserve the name “security policy”. … We need a genuine security policy that really does make us safer instead of threatening us. (more about security theatre at Digitalcourage, in German)

How did the MEPs in the EU Parliament vote on mandatory fingerprinting? 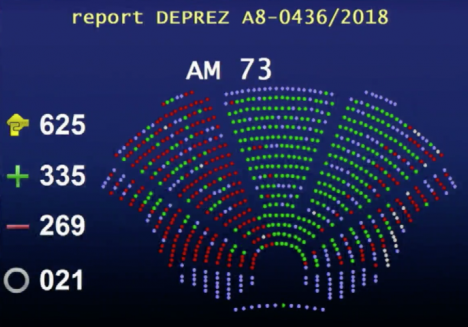 MEPs who voted for (+) or against (-) or abstained (0) are listed from page 107 onwards in the PDF for voting on europarl.europa.eu from „A8-0436/2018 – Gérard Deprez – Am 73“. The data is also available as .docx  und .xml. A searchable overview of all German MEPs is available on the European Parliament website, also sorted by federal states.

Donate or become a Member

Our web forms for ► membership and ► donations are currently in German only, but we will gladly offer advice via ► e‑mail. English versions are on our to-do list.

► Digitalcourage e.V. works for a liveable world in the digital age.
Since 1987, Digitalcourage (previously named FoeBuD) advocates for fundamental rights, privacy and protecting personal data. We are a group of people from a variety of backgrounds who explore technology and politics with a critical mindset, and who want to shape both with a focus on human dignity.
Every year we bestow the German Big Brother Awards (“Oscars for data leeches”). We contribute our expertise to the political process – sometimes without being invited.